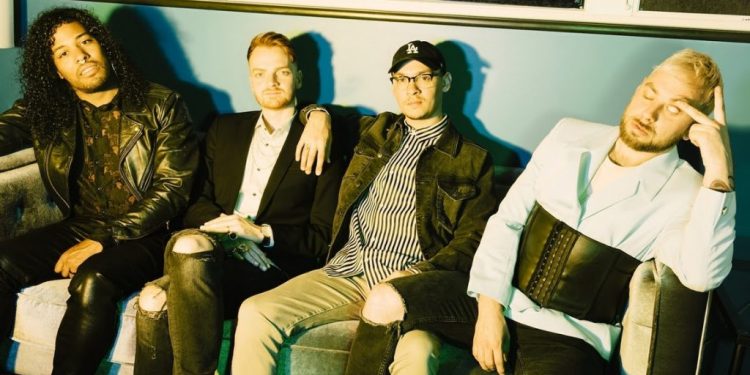 Montreal, Quebec – Metalcore band Issues have a concert on December 4th at Club Soda in Montreal. The four-piece band based out of Atlanta, Georgia is comprised of vocalist Tyler Carter, drummer Josh Manuel, bassist Skyler Acord, and guitarist AJ Rebollo.

Issues have been nominated for seven Alternative Press Music Awards and have won two. First, they won “Artist of the Year” in 2015. Next, Skyler Acord earned the accolades of Best Bassist in 2016. Also, their 2014 self-titled album hit number 9 on the Billboard 200 chart.

Issues are touring and promoting their new album Beautiful Oblivion. That album has received numerous positive reviews and has been well received by fans.

“It’s been overwhelmingly positive, which has been awesome considering how many risks we took. Beautiful Oblivion is conceptually about using music to help you heal and turn trauma into growth. We went through a lot making this album so it’s definitely a look inwards,” award-winning bassist Skyler Acord explained.

The album, which ranked number 181 on the Billboard 200 chart, was released on October 4th, 2019 via Rise Records.

“Rise is awesome! They give us a bunch of freedom, for better or worse. They’ve really allowed us to search for our sound,” Skyler Acord replied.

Issues worked with producer Howard Benson on the album. Howard Benson has produced music for Three Days Grace, My Chemical Romance, The All American Rejects, and Kelly Clarkson.

“Howard kicked our asses to get the best songs out of us. He’d be in and out as needed and give the band space to work but chime in any time we started to get off track in key ways. He was very hands-on with Tyler too and got awesome, emotional stuff out of his voice,” Skyler Acord noted.

On September 26th, 2019 Issues released the official music video for their single “Flexin” which has already accumulated over a quarter million views via YouTube.

The video portrays seniors who feel young again; however, it’s not anything Acord can relate to first-hand yet.

“Haha, I hope I’m not old enough to relate to ourselves in that video anytime soon! The idea was that in 50 years we’ll still be on our bullshit,” Skyler Acord responded with a laugh.

Issues, who are hitting the road again, have toured with bands such as Of Mice and Men, Beartooth, All Time Low, Atilla, Bring Me The Horizon, Ice Nine Kills and many more.

They have also performed at various music festivals including Vans Warped Tour, Slam Dunk Festival and Reading and Leeds Festivals.

On the upcoming tour, they will be sharing the stage with Sleep Token, Polyphia, and Lil Aaron.

“This is my favorite bill we’ve ever put together. I watch the entire show front to back almost every night, which I’ve never done. Everybody is the best at what they do and it’s amazing to watch,” Skyler Acord noted.

Acord is also looking forward to playing some of the new Issues songs live.

“I love playing Downfall, the dynamic shift is so extreme from the verses to the huge riffs to the breakdown. It’s fun to ride that wave,” Skyler Acord stated.

Issues are looking forward to their upcoming concert on December 4th at Club Soda in Montreal.

“Strap in and take work off the next day because this is going to be an experience! Get there early because if you miss Sleep Token you’ll regret it forever,” Skyler Acord concluded.

The doors for the concert are at 5:30 pm and the show starts at 6:30 pm. General Admission tickets are $33.50 and can be purchased online.