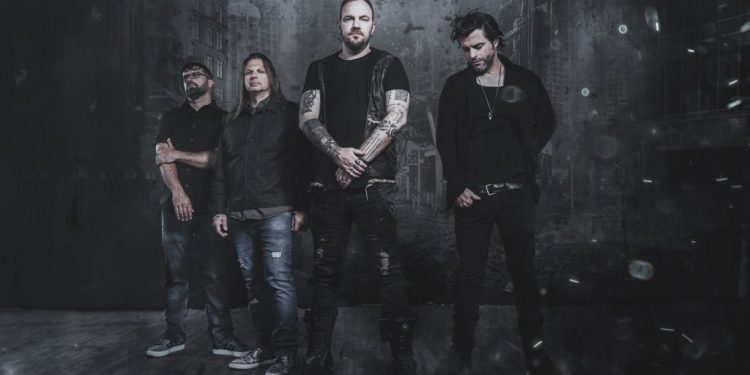 “It was a cool process working with Brian Sperber. Of course, Mike Mushok worked with him on a couple of Staind records. Brian worked on my favorite Staind record, “Chapter V.” When we started the process of writing the songs and demoing stuff, Mike suggested we work with Brian as he had worked with him in the past,” Adam Gontier said.

“We flew down to Brian’s place, worked on a couple of songs together, and it turned out well, so we ended up sticking with Brian to produce the entire record. It was a good process. The main thing I hope to get working with a producer is someone who will set the bar very high for me when I’m singing, doing vocal performances, and harmonies. He helped us in deciding which harmonies and different melody ideas. It was a good process, and I’m really happy with how it turned out,” Adam Gontier added.

Additionally, Saint Asonia welcomed an all-star cast of co-writers into the process, including Dustin Bates of Starset, Stevie Aiello of Thirty Seconds To Mars, Sully Erna of Godsmack, and Keith Wallen of Breaking Benjamin.

“When we started the process of writing, Mike and I had a bunch of ideas. That’s how we wrote the first record. Mike writes the music, and I add melodies and lyrics. This time around we wanted to add specific elements we didn’t have on the first record. We wanted to bridge out and write some songs with other guys who are in bands that aren’t too similar to us. Dustin (Bates) from Starset and Stevie (Aiello) of Thirty Seconds To Mars both contributed. Also, “The Hunted” was co-written by Sully Erna of Godsmack. Lastly, and Keith Wallen of Breaking Benjamin co-wrote on the songs “Beast” and “Ghost” which was cool because Keith is a great songwriter. Mike and I were excited to sit down with some other guys and come up with ideas,” Adam Gontier reminisced.

The single for the song “The Hunted” was released in July. It features Sully Erna of Godsmack. It was produced by Jonny K of Disturbed and by Brian Sperber. The track hinges on guttural guitar punctuated by harmonic squeals before descending into a trudging beat. Adam and Sully lock into a hypnotic and hard-hitting harmony, uniting these two dynamic rock forces on one anthem as they declare, “Now I’m the hunted.” Lyrically the song is about the feeling of being trapped.

“The idea for the song was already in place before Saint Asonia started. It was going to be on the soundtrack of a film, but that didn’t happen. With some alterations, and tweaks, and changes to the verses, we re-did the song in the early stages of writing for this record. When I wrote the verses, I just took my take on it, a feeling of being trapped. It’s something I write a lot about, not being able to get out of situations. Lyrically, for me, the song is about trying to get out of situations you’re stuck in, and finding a way to get out of it,” Adam Gontier noted.

On another song, called “The Fallen”, Adam Gontier pays homage to deceased musical icons Chester Bennington, Chris Cornell, and Gord Downie. The heartfelt song is a tribute to three of the most influential artists of his career.

“All of them had a big influence on me when I started writing music. I started when I was 14 years old. At that time, I was really into the Seattle music scene with bands like Soundgarden, Pearl Jam, and Alice in Chains. Also, because I was born and lived in Canada, The Tragically Hip was a huge musical influence on me as well. Chester Bennington, Chris Cornell, and Gord Downie were all incredible singers, songwriters, and performers. They are three of my all-time favorite artists. Writing this song was the right thing to do. I had a lot of feelings and emotions like everyone else did when we lost them. It felt right to put them in the song, and that’s why I wrote “The Fallen,” Adam Gontier disclosed.

The song “This August Day” reaches an emotional peak with Adam revealing the most intimate narrative of the album. Two years ago, Adam Gontier was in a dark place, relapsing from alcohol and substance abuse. At this same time, across the continent, his son was being born. It was a life-changing day. With the help of family, friends, and attending a treatment centre, Adam was able to find his way back into recovery.

“I’ve always tried to be very transparent when it comes to music, being able to share the things I went through in my music. It wasn’t difficult to share. At the same time, songs aren’t always blunt enough that it can only mean one thing. It means something to me, but my hope is it will mean something different to them,” Adam Gontier disclosed.

Family is important for Adam Gontier, and he shares his thoughts working alongside his cousin Cale Gontier in Saint Asonia.

“We had a lineup change, and my cousin Cale joined the band on bass. Growing up with Cale, our plan was always to be in a band together, play music together, and now that is happening. We started playing together when we were five years old, not playing shows of course. Our whole family is pretty musical, so we grew up with it,” Adam Gontier recollected.

Life after Three Days Grace has been liberating for Adam Gontier. He is famous for being the voice of mega-hits songs like “I Hate Everything About You” – a song that has been streamed a quarter billion times on Youtube. Despite the fame and success with Three Days Grace, there is a certain freedom to start a new band, to start fresh.

“It creates more freedom this time around, starting a new band, and starting from scratch. It’s been a liberating and fun process. It’s not easy, the difference there is all the time and effort towards Three Days Grace. That’s no longer there, so I’m starting the whole process again with another band, but it’s a lot of fun. It’s not easy, it’s hard work, but it’s great. I do enjoy it,” Adam Gontier replied.

“I’m proud and happy with the support from all the fans I had with Three Days Grace. They all stuck around quite some time between records. It’s cool that the support is still there. It’s easy for people not to care, so it’s awesome knowing people are excited about it and excited about this band in general. The plan is to continue playing shows and making records for as long as people want to hear us,” Adam Gontier stated.

“The Mötley Crue and Alice Cooper tour we did in Europe was a lot of fun. It was awesome! There were three bands, and we were the first band on stage. It was cool sharing the stage with legends every night. We’ve toured with so many great bands, and have played awesome festivals, but The Mötley Crue and Alice Cooper tour is a standout in my mind. It was a blast, and among the best tours we’ve done,” Adam Gontier reflected.

When will Canadian fans be able to see Saint Asonia next?