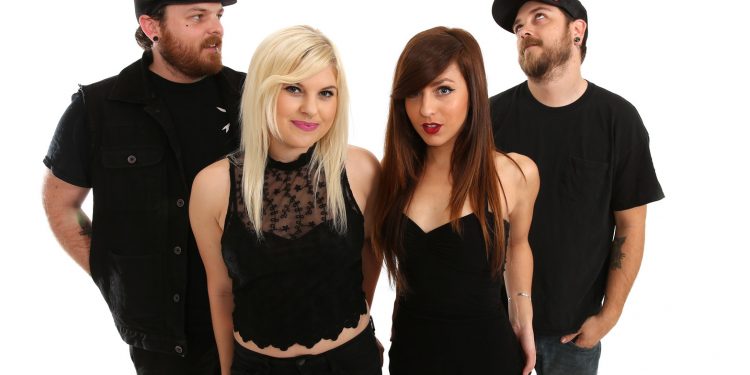 Oceanside California – The Bombpops have been making waves in the SoCal punk scene over the past ten years. The band which consists of Jen Razavi, Poli Van Dam, Neil Wayne, and Josh Lewis is releasing their full length album “Fear Of Missing Out” on Fat Wreck Chords this February 10th, 2017.

The band began to gain notoriety in California opening up for Nofx and No Use for a Name. In 2012 No Use For A Name frontman Tony Sly expressed interest in producing an album for The Bombpops.

“In 2012 Tony Sly approached us at a show we played with him and he started to talk to us about our songwriting. At the time we had just finished up playing a few shows with No Use for a Name and Nofx. He asked us how we felt about someone working on our songs with us. We were kinda stunned. We were like, “someone like you?” Tony Sly was collectively one of our favorite songwriters as a band, and we were really into the idea of him writing songs with us.

To this day it’s still one of the coolest things that happened to us as band. He said something along the lines of, “Yeah, Fat Mike says you’re cool kids but maybe I should help you out”. He said it was like Fat Mike sent him on a mission to work with us. Of course we were into the idea. We discussed ideas, he mentioned how much he loved Bad Religion and he could see their style working well with us.

We had some really great punk rock conversations with him the next time we saw him before he tragically passed away. Clearly, we never worked with him on anything, but it was honour to have him approach us and suggest it,” said guitarist and vocalist Jen Razavi.

Jen Razavi has been a huge fan of Fat Wreck Chords, a label that has represented bands like No Use for a Name, since she was 15 years old. She remembers looking up to all the bands on Fat Wreck Chords. Now The Bombpops are on that label. Razavi’s best friend and Rosie Gonce is also signed to Fat Wreck Chords playing drums for the band toyGuitar.

The Bombpops guitarist and vocalist Poli Van Dam shares similar sentiments about being a part of the Fat Wreck Chords family.

“It means the world to us! It’s unreal to be a part of something like Fat that has had such a profound impact on the music and culture that sort of made us who we are. We’ve always wanted to be a part of the family and now that we are, it finally feels like home. We feel accomplished, proud and determined to keep grinding hard to take our band to the next level,” added Poli.

The album “Fear Of Missing Out”, which features a dozen catchy high energy punk songs, was recorded in April 2016. The songs on the album were written over a number of years and in a way are an anthology of their work.

“The songs on “Fear of Missing Out” span some time. With a few old songs from when we first started as a band, some songs that we started working on about 2 years ago, songs that were specifically written for the record and then to songs we wrote just weeks before going into the studio. We went out of town to do the record, which was huge for us. We were able to surround ourselves with the record and work on it every day till it was done. If we had done it in LA, it would have taken much longer, we would have let our daily life get in the way and I think the tone of the record would be much different,” stated Jen.

The Bombpops recorded at Chris Fogal of The Gamits studio ‘Black in Bluhm’ located in Denver Colorado. Fogal, the veteran pop punk rocker, produced, recorded, mixed, and mastered the album.

“We worked with Chris Fogal of The Gamits on this record at his studio, Black in Bluhm in Denver, Colorado. He produced, recorded, mixed and mastered the whole thing. Having Chris’ input of the record was so cool. He was able to take the songs to the next level sonically and structurally,” added Jen.

The Bombpops, who have toured Europe and most of the United States, are looking forward to getting back on the road. Canadian punk fans can expect The Bombpops to visit this spring.

“We’re excited to say that we’ll be getting to some new places this year, including the Midwest, East Coast and even Canada this spring. We’ll also be heading over to Europe this year. We’re really trying to go as many places as we can in support of the new record,” reflected Jen.

The Bombpops have some exciting shows coming up, including an official album release party and gigs opening up for The Bouncing Souls and opening for Bad Religion.

The official Record Release show of “Fear of Missing Out” is on February 10th at The Redwood Bar in Los Angeles.

“We are mostly stoked about this show because it’s our hometown dive, it’s always a weird ass party at The Redwood. It’s family there. We are really looking forward to an exciting release with our LA people,” said Poli.

“This is gonna be a blast! We love the Bouncing Souls and we get to play with our friends in Get Dead. Our drummer Josh, filled in for their drummer the last time they were in Canada. We love those dudes! Also, it’s on St. Patrick’s Day, so you know it’s gonna be a party,” said Jen.

Lastly, The Bombpops are also opening for Bad Religion on March 18th at the House of Blues in San Diego. This show is gong to be a bit of deja vu for the band.

“This show is kind of a mini blast from the past for us. We have played with them 5/6 years ago at the same venue. It’s always super awesome to play with punk rock legends and these dudes have been very kind to us since day one,” concluded Poli.

For more information on the album and upcoming shows visit the The Bombpops website.