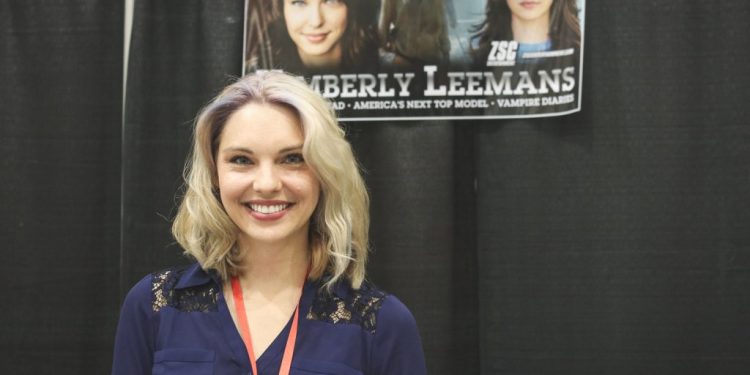 Kimberly Leemans joined the Walking Dead in the Season 6 episode titled “Knots Untie”. She played the character of Crystal, a resident of the Hilltop community. In the episode Ethan, Andy, and Crystal confront the leader of Hilltop, Gregory. Ethan delivers a message from Negan by stabbing Gregory. Rick Grimes retaliates killing Ethan, and Kimberly Leemans character punches Rick, before being taken down by Michonne. It’s after this altercation that Rick Grimes and his group first learn about The Saviors.

“Working on The Walking Dead, has been one of the best experiences of my career. The cast was incredibly welcoming, especially Andrew Lincoln. Finding out that I had to punch the lead of the show could have been super intimidating but he came right up to me and was like “really go for it”. His energy is contagious it’s so inspiring to see him and the rest of the cast at work. We shot our big confrontation scene all they way through multiple times with several cameras rolling simultaneously. So when I got laid out by Danai Gurira, we had to go through the motions, even though my amazing stunt girl Kara Kimmer took the real hit,” Kimberly Leemans reminisced.

The actress is honoured to be apart of the Hilltop Community and the Walking Dead family. Even though she was a cast member, she found the Season 6 series finale just as thrilling as any other fan.

“I’m so excited and honored to be apart of the Hilltop Community. It’s always exciting when new groups of people are discovered in this world. We’ve been fairly sheltered compared to other groups, but from what I saw at the end of Season 6 it looks like there’s a whole lot of hurt coming everyone’s way! I was on set working on another project when the Season 6 finale aired so the next morning I tried to catch up and watch it as soon as I could because I knew everyone would be talking about it. You could just hear screams coming from my trailer and people would walk by and be like Walking Dead! We would just nod with looks of despair and continue getting ready. It was so intense. I had a feeling Glenn would get it from the comics, but the way they did it, they really kept us on our seats, they made us feel safe for a moment and then ripped it away. That’s how it feels to live in that world. I think they did a great job,” Kimberly Leemans stated.

Long before working on the set of the apocalyptic world of the Walking Dead, Kimberly Leemans was walking on the runway as a contestant on American’s Next Top Model. Her experience on a reality television show made her feel more comfortable in front of the camera.

“Top Model was such a unique experience. Reality TV has evolved so much since I was on it, but it was one of the strangest and coolest experiences I’ve had. I watched the show UnReal (so fun by the way) with my partner and he was like is that really how it is? It’s a different beast then The Bachelor type shows but the story for me has always been in the editing. It’s incredible how they can find the story lines they want to tell that way. I’d like to think that my time on Top Model definitely made me feel more comfortable in front of the camera. When you have three floating camera crews around you at all times for almost 2 months, you start to forget they’re there,” said Kimberly Leemans.

After her experience on America’s Next Top Model, Kimberly Leemans moved to New York City to focus on acting, and she began work on the set of Gossip Girl. She became an extra, and she had a memorable experience meeting Jessica Szohr, who played Vanessa Abrams on Gossip Girl.

“This is really where it all sort of began. I was fresh off Top Model when I moved to New York City. Acting had always been my focus so right away I began taking extra jobs anywhere I could to earn my SAG (Screen Actors Guild union card). Gossip Girl had me work a lot and I learned as much as I could watching the cast and crew. The energy of being on set gives me a high that I crave over and over again. One of my most memorable moments was during a big group scene. In between takes Jessica Szohr took the time to thank all the extras for their hard work through the long hours. That is something I’ve held with me until this day, I make sure to pass on the same courtesy every time I’m on set. Whether you are #1 on the call sheet or girl 1, we’re all here to do our job and to be seen by someone you hope to be one day is powerful,” Kimberly Leemans reflected.

Kimberly Leemans also played the character of Kimmie Hoffman on the television show Nashville. She was able to scratch off two items from her bucket list with this role.

“Being an actress you get to live many lives that you wouldn’t normally live. When I was younger I had aspired to be an E! News host and after seeing the documentary The Cove, I was so inspired by Hayden Panettiere, I was eager to meet her. When I got booked for Nashville, I got to scratch both of those off my bucket list,” Kimberly Leemans explained.

“I never got to meet her personally though I’m looking forward to it in the future. I think she’s gorgeous so to be cast as her flashback is quite the compliment,” Kimberly Leemans stated.

Kimberly Leemans has also worked on CSI: Miami. Law & Order, Life on Mars, Cupid, and How to Make It in America to name a few. Her film credits include Bamboo Shark, 30 Nights of Paranormal Activity with the Devil Inside the Girl with the Dragon Tattoo, Out West, The Squeeze, and Fire City: End of Days.

In her youth Kimberly Leemans was a very passionate animal activist. Recently she has created a show called “Catching the Green Eye” that promotes environmentalism.

“I was much more active and passionate when I was younger, I was ready to take down whaling ships! Thus my admiration with The Cove as stated earlier. But growing older, most of the time, brings you lessons of rationality. I’m working on finding a balance between saving the world and putting one foot in front of the other. I don’t think you need to watch all the awful Youtube videos that are out there to get what’s going on, I think its about making a conscious decision to consume responsibly. Even changing your diet just a little bit can have a massive ripple effect on supply and demand. I’m currently producing a travel show I created called Catching the Green Eye. It will inform viewers on how simple everyday decisions can really impact your carbon footprint and the environment,” said Kimberly Leemans.

The actress and environmentalist is looking forward to meeting the fans at CAPE when she visits Cornwall this spring.

“I have been to conventions before! its such an incredible energy. I’m so impressed by everyone’s dedication and talent with their outfits. It’s very special, and everyone is so happy, excited, and nice. I’ve met fans that will remember the smallest of things you did or said on a show that I never noticed. Some of the sweetest moments I’ve had are with shy fans, because they’ve done everything to be there and then they just freeze. We’re all the same, we just have different jobs. I can’t wait to meet all of you and hear all of your fan theories for the show. I would love to see some Hilltopers come by but everyone is welcome,” Kimberly Leemans concluded.