Interview with Mobina Galore opening for 88 Fingers Louie in Ottawa 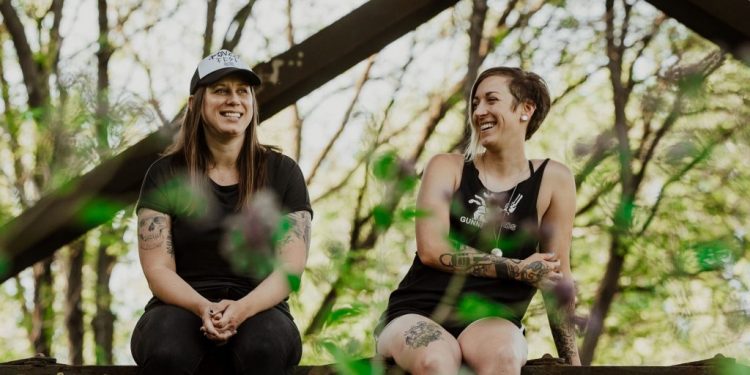 “Don’t Worry was recorded in the dead of winter, February 2019, here in Winnipeg; which perfectly fits the mood of the majority of the record. All of the usual emotions were at play here, excitement about laying down these new songs with a permanent stamp, frustration with creative blocks and lackluster performances and intensity over the nature of the lyrics. This was a very real process for all of us as putting these songs out to the world felt a little nerve-wracking, more than usual. Marcia got sick halfway through, I came close to losing my voice, but we persevered and worked hard to come out with a very strong product in our opinion,” Jenna Priestner replied.

The new Mobina Galore album “Don’t Worry” got 4 stars on the website PunkNews.org. CBC Radio 3 has also listed Mobina Galore as one of the Top 15 punk bands in Canada right now.

There are several songs off the new record that Mobina Galore is especially excited to play live.

“A couple of the tracks we’re most excited to play live are “Oh, Irene”, “I Want It All” and when I eventually figure out how to sing and play the bridge in “Sorry, I’m a Mess” I’m excited for that too,” Jenna Priestner added.

Mobina Galore have once again worked with both New Damage Records and Gunner Records.

“New Damage and Gunner Records both have been great helping hands for us each in very different ways which I think we as a band benefit from. This is our second record with NDR and third with Gunner. New Damage is amazing in helping with all our day to day business and setting up timelines for us which over the last couple years I’ve been doing and don’t have time for anymore. While they help with the heady load of marketing and advertising Gunner is a big help with pushing records on the road and getting us on large support tours. Currently, our biggest fan base is in Germany but slowly it’s coming back to North America, so I hope this album helps build our fanbase here in Canada and the United States,” Jenna Priestner explained.

In July, Mobina Galore released the music video for the single “Escape Plan”. The video shows images of the band riding bikes on a beautiful summer day.

“Chris, who is the videographer, collaborated with us on the idea to have a fun summertime music video to visually accompany the upbeat pop-punk nature of the song and I think we were successful in that. We had a blast riding around that park, drinking beer (Winnipeg brewery Sookram’s helped us out with that) and just f-cking around. It didn’t bring me back to childhood days so much as our Fernie days – that’s how everyone got around there – bike to baseball and have some beers, bike home. Bike to the river and have some beers, bike home. Bike to your friends and have some beers, bike home. You see the theme. We wanted to do that in Winnipeg so we did and it was fun and hot as f-ck – our days are so long here in the summer so we were lucky to spend 13 hours outside until the sun went down,” Jenna Priestner went on.

“It’s a true honour to be asked by Laura to go on this run with her new band. We had the chance of seeing them on one of our days off last year in Rock Island, Illinois and it was unreal so to see them play every night is going to be fun as hell. Marcia and I are huge fans of Against Me! and have toured with them twice so we look forward to seeing that crew again and maybe having a game of foosball or two with them. Maybe Atom will even tune-up Marcia’s snare for her again,” said Jenna Priestner with a laugh.

Of course, Atom Willard is the drummer of Against Me, and he also drummed for The Offspring, Social Distortion, Rocket from the Crypt, Angels & Airwaves, and Danko Jones.

Although Mobina Galore is a punk duo, it wasn’t their intention to be a duo.

“It wasn’t an intentional decision to be a duo, before we were Mobina Galore and I played more acoustic stuff we had a keyboard player and played around Fernie and went on one tour with that band, but when we decided to leave we just kept on as a duo and completely changed our sound,” Jenna Priestner recalled.

“It’s been almost 10 years since we’ve been playing together now and it’s been working, so no need to change it. It makes touring significantly easier and more affordable for sure! Logistically it’s easier to get two peoples schedules to line up then more, so there are advantages for sure. This record was recorded essentially as a four-piece band though, so we’ll see. Not planning to change anything anytime soon, mostly we’re not interested in hiring musicians when we can barely pay ourselves out after all the dozens of other people we need to pay to make this ship run smooth,” Jenna Priestner reflected.

Fans in Ottawa should come to The 27 Club early to see Mobina Galore open for 88 Fingers Louie. Of interest, 88 Fingers Louie features frontman Dan Precision who was the original guitarist of Rise Against.

“Get to the show early because we’re up first! Ottawa has been all over the map for us in terms of turnout making it hard to know where we stand there so we’re really glad 88 Fingers Louie has allowed us to hop on board so we can show Ottawa what we’re all about and hopefully sell some new albums,” Jenna Priestner concluded.

In other news, Mobina Galore released a new music video titled “Dig Myself Out” which can be viewed on Youtube.

In addition to their Ottawa concert on September 12th, Mobina Galore will return to the area on Friday, September 20th, to play Beau’s Oktoberfest in Vankleek Hill, Ontario.