Will the Catholic Diocese of Alexandria-Cornwall fade into history? 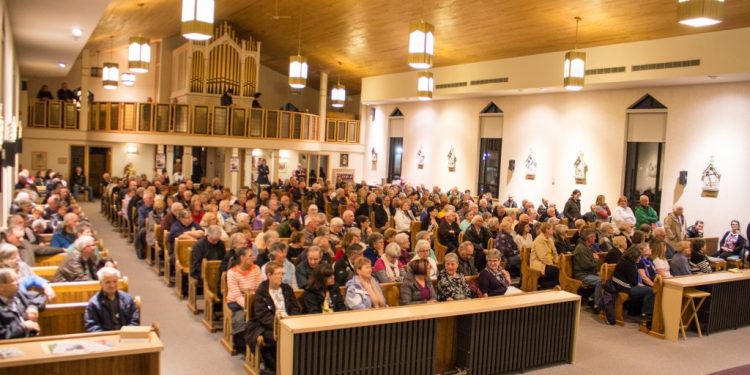 “Should the Diocese of Alexandria-Cornwall merge with the Archdiocese of Ottawa or remain a standalone diocese?” That was the principle question asked Monday evening by the diocese’s apostolic administrator, Terrence Prendergast. In the absence of its own bishop, the Archbishop of Ottawa was asked by the Holy See to conduct a review of Alexandria-Cornwall (A-C) with an eye to its future. The local bishop’s role was vacated when A-C’s previous bishop, Marcel Damphousse, was transferred to a diocese with a larger Francophone population.

Prior discussions included the possibility of the A-C diocese being absorbed by the other neighbouring archdiocese, Kingston. Tonight Prendergast clarified that was not an actual option since Kingston, with a single Francophone parish, is not a bilingual diocese. A-C Diocese is currently a suffragan diocese under Kingston archdiocese, its metropolitan. According to a history of the diocese written by the late Msgr Rudy Villeneuve, it was set up that way rather than being attached to Ottawa to reduce French influence in this decidedly Scottish diocese.

Apparently organizers of Monday evening’s gathering at St. Francis de Sales church underestimated the commitment of the community to have their say concerning this matter. After relocating from the parish hall to the larger church proper, the meeting got underway to a near capacity assembly. This was scheduled as the first of five such public consultations across the diocese, two in English, two in French and one bilingual. Although tonight’s event was one of the all-English consultations, it drew Anglophones and Francophones, urbanites and rural dwellers alike.

Anyone could ask questions and/or offer input from a designated microphone, but they were asked to keep it to no more than 2.5-3 minutes per turn. Some respected the request, but it was a hot-button issue for sure. The near two hour gathering was genial even though the vast majority of those who addressed the assembly were strongly opposed to any sort of merger with the Ottawa archdiocese.

Prendergast remarked that we are 15 months into a 1.5-2 year process. The archbishop assured the assembly in saying that no decisions have been made, but that issues are pressing.

CDSBEO Trustee Ron Eamer shared his observation that: “big cities don’t understand small rural communities.” Eamer also shared a sentiment expressed by many others that youthful bishops are needed to enthusiastically gather Catholic youth around them. He also expressed displeasure that a ballot had not been prepared for use at the meeting.

Helen McAlear, a music minister at St. Peter Parish, articulately addressed a number of relevant concerns. She was adamant concerning the necessity of having a shepherd (bishop) who lives among the sheep and that bigger is not better. She spoke of other options for reconfiguring area dioceses and that language need not be the number one issue, recommending that: “there is no need to be perfect in both languages.”

One of Margo Schwerdfeger’s recommendations was that some members of the Ottawa-based Companions of the Cross community of priests be called upon to take up residence at St. Columban’s large Cornwall rectory and use it as a base of ministry operations here in this diocese. This has been a common practice of the Companions in other cities. The archbishop responded that it won’t happen.

Greg Light was one of the few voices taking the opposite position, saying that the diocese has an incredibly diverse history and that it will be sad to see it go. But, he added: “there is no question – it has to happen”. Light was much more confident than most that the history is sufficiently documented and will be there regardless. He looks forward to the hope of greater access to programs and parish renewal by gaining membership in the Ottawa archdiocese.

As for next steps, the archbishop indicated that a consolidated report of the five sessions will be prepared for the Holy See, that he remains listening and attentive, and that it will be up to the Holy Father to approve or disapprove of the conclusions. The parishioners can look forward to feedback via homilies and newsletters. Prendergast summarized the essence of what he heard at the meeting regarding the nature of  the concerns conveyed: respect for the history, spirituality, vision and hope for the future.

Some participants accepted the offer to gather in the parish hall for refreshments and fellowship following the meeting.

Interview with Me First and the Gimme Gimmes