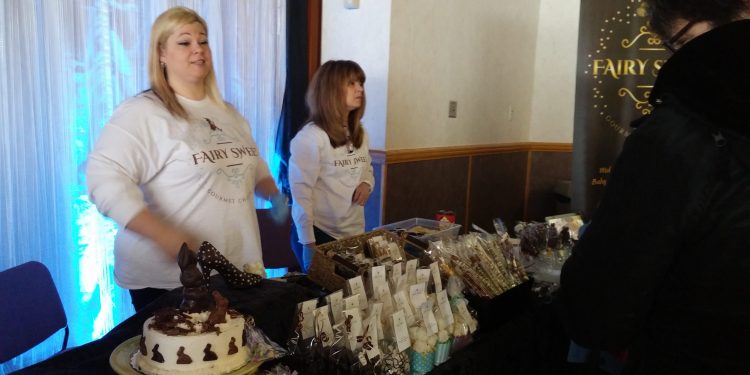 The event, put up by the Seeker and doubling as a fundraiser for SASS and Maison Baldwin House, attracted women from as far as Montreal and Brockville and featured some 70 vendors offering a wide variety of products and services from beauty, to health, spirituality, jewelry, art and furniture, to massage therapy.

Fairy Sweet, one of the vendors who also was one of the three winner of the BOOTHS OF HONOUR, chose this venue to unveil their attempt in breaking a Guinness World Record.  The Cornwall Chocolatier created what she claims to be the World’s largest FERRERO ROCHER and the World’s largest man-made Easter Egg ever recorded and unveiled her product at the show.  The massive rocks were formally weighed and documented for further investigation by Guinness.

“We are so humbled to have been able to unveil our World Records with the Seeker Chicks”, said Sue-Anne Atkins, co-owner of Fairy Sweet. “Julia and Mai-liis are very strong beautiful women and what better way to unveil something so grand and powerful than with a group of women on Women’s day!”

BeautiControl and PartyLite were the other two ladies who won one of three booths of honour.  Those tables were auctioned off to the highest bidder and all revenues from the booths of honour will be going directly to SASS and Maison Baldwin House.

Debuting as a Motivational Speaker at the show was the one and only Roxanne Delage who gave a talk about her life in a small town.  “We wanted to keep our speaker local”, said Julia Lucio, show co-organizer.  “Roxanne is proof that you can stay in a small town and succeed, and that is very inspiring.”

Here are some snapshots of the event.

What Advice Would YOU Give Your Younger Self?