by Khyle
in News and Announcements
Reading Time: 3 mins read
57 3 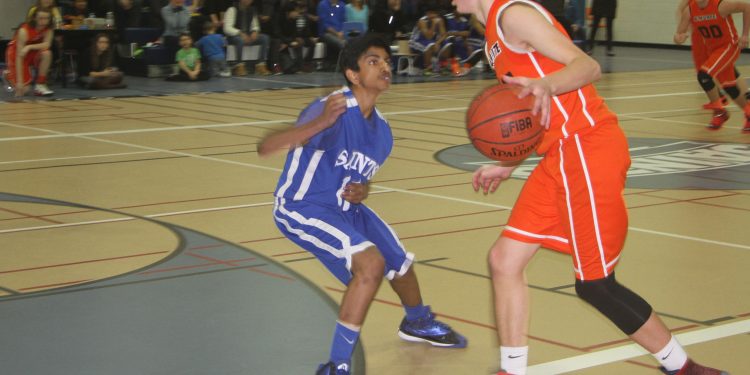 While the Saints kept up in the early going, St. Lawrence eventually bowed to the ‘Bolts’ size and speed.  The margins grew by quarter, with the score 8-7 in favour of ADHS after the first, 27-23 at halftime, and then 41-31 after three.

“It’s been a long time coming and this is an awesome feeling,” said ADHS coach Dan Hickey. “It has been 18 years since an Almonte junior team has won the EOSSAA gold medal.”

Hickey said the victory boiled down to tenacity.

“Hustle, hustle, hustle is our game,” said Hickey. “We never give up. We always run the court. Our game is fast break and we proved it today.  I think we tired the other guys out and then offence just took care of itself.

“We also out-rebounded them. I don’t know if we had the advantage in height. They had a couple of big guys out there too, but our guys were more aggressive.”

Strong performances by ADHS co-captains Brendon Hudson, Liam Hickey and Sam Dyck helped carry the ‘Bolts to victory. The three got a combined 37 of the ‘Bolts’ 54 points.

Saints coach Josh Greenley said the size of the ‘Bolts players made the difference.

“We have some really skilled guards and a couple of bigs (tall players) that can rebound and really work it, but their extra size just kind of wore us down,” said Greenley. “We did a good job in the first half of getting rebounds, protecting our rim, but in the second half their size just pushed us over the edge.”

Despite the loss, Greenley had high praise for his team, not just in the final but for their performance throughout the season.

“They love being here. They love working hard here. It was a treat to coach them. They’re actually some of the most strong academic students as well … we have four or five honour roll students (on the team) so not only are they great athletes who work hard they also do it in the classroom, which made it (the season) really fun.”