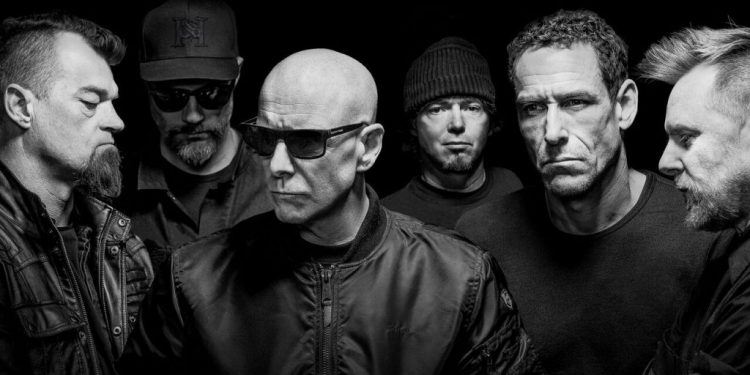 Their brand new album ‘Little Army’, which has been getting spectacular reviews online, was released on June 2nd. Hugh Dillon explains the creative process of recording the new songs, and the chemistry he has working along side Trent Carr and Tim White.

“The songs: “The Devil’s On Fire”, “Broken”, “Captain of the Shit out of Luck” kind of happened really quickly. Trent Carr, the guitar player, is an incredible architect when it comes to an authentic guitar sound. Him and Trent have been playing together since their teens, so they have a natural chemistry. We have been writing songs together for decades,” said Hugh Dillon.

It was just one of those things where there was a great rift, they built it, and then I wrote the lyrics for “The Devil’s On Fire”, and it just became fun to play. It was the perfect storm of creativity and not giving a f*ck. Sometimes you get that inspiration where your subconsciousness jumps to the forefront, and you have no filter. It allows you to just write, and if you like what you’re hearing, that builds momentum. When working on the new album, we spent a lot of time together, sitting in a room, hanging out, joking, laughing, and telling stories and reminiscing about things. We didn’t come car keys jangling, we stayed. We were ultra focused recording these songs. We were relentless. There wasn’t just a spark, we burned the whole house down with it on this record,” Hugh Dillon added.

The new album was released on Cadence Music, a label that is very passionate about the Headstones. Hugh Dillon explains why Cadence Music was the right choice for the band.

“We were playing a gig in Toronto in November, and the people who run Cadence, they listened to the demos of the songs that I had mentioned. They showed up at the gig and Iain Taylor, the President, actually listened and cared. Our drummer was late, and Iain got up and did drums. He said, I love that “Devil is on Fire” song. This is the record company President! It’s so very rare that you find people who really give a shit about the music. So much so that the President of the company can get up and play drums for the lead track. There is a whole crew of folks, including Jeff Nedza, who are super passionate, no bullshit, music people. You don’t come across it every day,” Hugh Dillon explained.

The Headstones have had a very successful career reaching Platinum status with their debut album ‘Picture of Health’ in 1993. The band also has a few Juno Award nominations.

In addition to being lead singer of the Headstones, Hugh Dillon is also an accomplished actor. He has had notable roles in television shows like the Gemini Award winning show Durham County and the Gemini Award winning program Flashpoint. He’s also been in films like Trailer Park Boys: The Movie, Assault on Precinct 13, Ginger Snaps Back: The Beginning, and Canadian cult classic Hard Core Logo as Joe Dick. There was a recent Toronto play adaptation of the movie and book. Did Hugh Dillon see it?

“No, I didn’t see the play Hard Core Logo. I got the heads up from Joe of DOA. He told me it was happening, but at that period of time I was all over the map. I was recording a record, I was everywhere. I heard nothing but great things, and I sent a break a leg text to one of the producers I was in touch with. I heard it was just great, nothing but positives,” Hugh Dillon replied.

Hugh Dillon is still acting, most recently in the re-boot of Twin Peaks. He plays the character of Tom Paige who is Ashley Judd’s husband in the show. Working with Twin Peaks co-creator David Lynch was a bucket list item for the renowned musician and actor.

“Working with David Lynch was a dream come true. It was a bucket list moment in terms of acting. I was a huge fan of his. He was just such a generous, kind, creative force. Just to be on set with him, and watch him work, and to be directed by him. He went so far as to put on some of my makeup, and you could smell the American Spirits cigarettes on his hands. It was very surreal. It was one of the most artistically satisfying moments I had on a film set,” Hugh Dillon reminisced.

“I was lucky just to be able to work with directors like him, and Jonathan Demme (he did Silence of the Lambs), I worked with him on the Killing. I’ve just been so fortunate enough with film and television and the same with rock and roll. It’s been an exceptional experience,” Hugh Dillon added.

The next great experience for Hugh Dillon will be when the Headstones share a bill with the Monoxides at Mud City Meltdown.

“The Headstones are so lucky because we get to play with one of our all time favourite bands the Monoxides. It’s a dream come true for us. We played with them when we started in the 90s, and they are one of the most real rock and roll bands I’ve ever seen. To be in the East Coast and playing with them, Moncton is going to see a killer rock and roll show. With any luck, we’ll be touring with them later this year,” Hugh Dillon concluded.

The official spokesperson for Mud City Meltdown is Rejean Claveau, who worked on the television station Music Plus for 16 years. He was a host for the program 1-2-3 Punk and interview and meet so many bands like Nofx, Bad Religion, Offspring, Greenday, and Blink 182. He has had experience working on music festivals all across North America.

“With the 16 years I spent at Music Plus, I had the chance to go to a bunch of music festivals around North America, a few festivals and tours out in Europe as well. I had worked with Vans Warped for a while, I worked with Rockfest in Montebello from the beginning and was a spokesperson and MC for them for the past two years. I knew this year I wouldn’t be able to make it out. Then the guys from Mud City Meltdown came to see me, asked me to go for a beer, and asked me if I would be a part of the festival here. I jumped into right away, because I am a huge Moncton fan, and I’m a huge music fan. Putting those two together was a natural fit for me. So I jumped in with them, and gave them the experience I had with different festivals, the contacts I have with different bands and management, and spread the word that from July 25th to the 30th, Moncton is going to be the place to be,” Rejean Claveau stated.

Mud City Meltdown is going to be represent the very best of Moncton – from language to culture.

“What is Moncton? It’s multicultural, bilingual city. Let’s put a festival together that’s going to please the masses, and be something that represents Moncton in a crazy way. At the same time, if we compare it to Montreal, it might not be as punk as the Pouzza Fest in Montreal, but we’re trying to put on the same kind of festival in the sense that we’re showcasing the different venues we have downtown Moncton, like Pouzza Fest does in Montreal,” Rejean Claveau explained.

The official spokesperson is familiar with the headlining band at Mud City Meltdown.

“I met the Headstones before, but I never had them on 1-2-3 Punk. I interviewed them for a different rock show one afternoon in Montreal. I met them a few times, and interviewed them once,” Rejean Claveau recalled.

He is also a fan of Hugh Dillon’s work in the movie Hard Core Logo.

What can cans expect from Mud City Meltdown? It’s a festival in it’s third year, that will be going the extra mile to provide quality entertainment.

“We’re going that extra mile for the third edition of Mud City Meltdown. We’re going outside, river front, two nights, one night that pleases more the French crowd, and one night that please more the English crowd. The Headstones show is going to be crazy, because we also have the Monoxides, Moncton’s own Monoxides reunion show, and Like a Motorcycle from Halifax; so that’s going to be a sick night,” Rejean Claveau concluded.

Mud City Meltdown takes place from July 25th to July 30th. The Headstones will be headlining the new festival main stage at Riverfront Park on Friday, July 28th. Tickets are now on sale for the show which will also feature Moncton’s favorite sons, The Monoxides; 2017 ECMA winners, Like A Motorcycle; and Gold City Ashes, the new project from local legend Chris Colepaugh. Doors open at 6:30 pm and the show gets underway at 7:30 pm. You can purchase your tickets online at www.mudcitymeltdown.ca, in person at the Moncton Coliseum box office or over the phone by calling 1-888-720-5600.