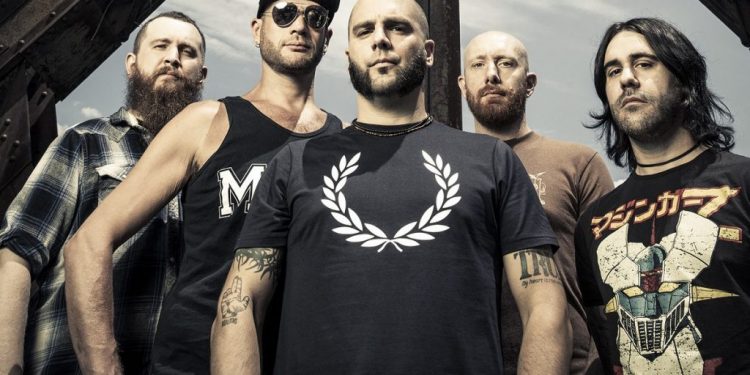 Ottawa Ontario – Jesse Leach, vocalist of Massachusetts metalcore band Killswitch Engage, will be in Ottawa on September 14th at Barrymore’s for a concert. Instead of being behind a microphone, Jesse Leach will be behind a turntable spinning tracks as a DJ.

While on sabbatical from the rigors of touring, Jesse Leach decided to pursue his musical interest as a disc jockey.

“I just decided one day, while at home for a few years off the road, it was something I wanted to do. I love hearing music with people, even if it’s not my own. I love seeing people sing along, dance, or head bang; it’s a rush!,” Jesse Leach explained.

“In truth, I prefer DJ’ing a mix of punk, reggae, hardcore, and more danceable stuff from The Bad Brains to The Clash, Billy Idol, David Bowie, and anything in between,” Jesse Leach responded.

“However, most people and promoters use Killswitch Engage as a promotional tool, which I understand, so I end up doing a good amount of metal, death metal, and heavier stuff. I just want the audience members to enjoy themselves,” Jesse Leach noted.

Don’t expect Jesse Leach to play any Killswitch Engage songs during his DJ set, unless the audience demands it.

However, he discloses the one Killswitch Engage song off of the band’s latest album “Incarnate” he would consider spinning – an amazing song that often gets overlooked.

“Nah, I never DJ myself, unless a crowd chants it, which I had to do in Berlin once. So no, I’d rather not. But if I had to pick one off of “Incarnate”, it would be “Reignite” which is a bonus track and an overlooked song on that record in my opinion,” Jesse Leach revealed.

Playing at Barrymore’s will be a much more intimate experience for both Jesse Leach and fans. The Killswitch Engage vocalist usually performs at festivals and at larger venues.

“Yes, it is much easier (to connect with the fans). First off, it’s just me. Secondly, the clubs are usually much smaller than where my bands would play. I love it, though — interacting with fans and having a few drinks with them is great! As I mentioned, I just want fans to have a good time, so I tend to really put out a party vibe. I want people to let loose and get away from the mindset their jobs or home life may force them into. It’s a release; music is therapy!,” Jesse Leach pointed out.

Jesse Leach, who has spoken openly about mental illness in a video interview with Loudwire, is helping to change that.

“It’s important because I myself suffer from mental illness and I’ve lost friends to suicide. I’ve worked with “You Rock Foundation,” as well. I do what I can when I can because it is a topic that does not get discussed enough and many people suffer in silence,” Jesse Leach acknowledged.

Whether through activism or playing music, Jesse Leach is a remarkable and ground breaking artist. He and his band mates in Killswitch Engage were nominated for “Best Metal Performance” at the Grammy’s in 2014.

“It was cool; my parents were proud and I had fun going to the awards for sure. In the grand scheme of things, though it is basically an industry-run, industry-voted-for award. It doesn’t have a ton of impact on our career other than a title of “nominated.” It’s cool. Metal is recognized in such a pop-orientated institution, but it doesn’t give heavy and underground music the credit it deserves,” Jesse Leach reflected.

In addition to touring with Killswitch Engage, and of course DJ’ing, Jesse Leach is also working on a new release for Times Of Grace, and on a punk/hardcore 7″ record with The Weapon.

“Times Grace — We have an albums worth of songs we are working on; I’m demoing a few this week and I’d say that it will be at least a few months before any of that is ready to record,” Jesse Leach stated.

“The Weapon is easy; we have five songs pretty much ready to record. My drummer has started doing his parts and we all will finish that this fall and eventually put out an EP or a 7″,” Jesse Leach added.

In the meantime, Jesse Leach is looking forward to returning to Canada. Killswitch Engage recently played Montebello Rockfest, about an hour away from Ottawa. According to Jesse Leach it was a great show.

“The (Montebello Rockfest) show was great! The place we played was beautiful, the crowd was rad, and the show was a party! I love Canada; it’s always a good time! The fans are die-hard and supportive! I’m excited to get back; I just hope people want to see me DJ up there,” Jesse Leach concluded.

In addition to Jesse Leach spinning the best in metal, hardcore, and punk, four fantastic bands will also be playing. The line-up for the concert is as follows: Inire, A Scar For The Wicked, Hatred Reigns, and Ottawa hardcore DJ Darken.

The concert is presented by The Diamond Mine Agency and CHORD Productions. The show is 19+. Doors are at 7:30pm, and the show starts at 8pm. Early bird tickets are $15 (limited to 50), advanced tickets are $20, and tickets at the door are $25. Advanced tickets are available at Vertigo Records, Compact Music Inc., The ODDs & SODs Shoppe, and online at ticketscene.ca. Barrymore’s Music Hall is located at 323 Bank Street in Ottawa Ontario. For more information about the show visit the Facebook Event page.