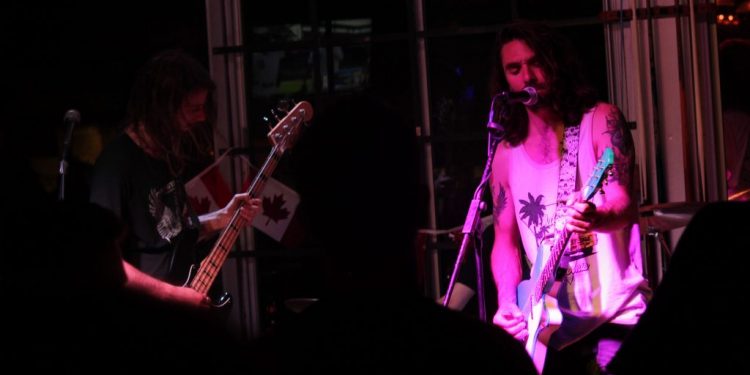 From the rich grooves of the Rolling Stones, to the head banging electric energy of Nirvana, the Mick Martel Trio provided a musical smorgasbord of rock hits, and it was right up the alley of fans in attendance.

“Johnny B. Goode? I didn’t expect that” chuckled Bubbles, an affable 64 year old and long time regular of Lola’s. “Their choice in music is great…I wouldn’t be sitting where I am if I didn’t like their music”.

Featuring an all-star indie lineup of Mick Martel (of stoner rock band, The Hazey Tones) on vocals and guitar, Gabriel Prieur (of blues rock duo, Prieur and Landry) on bass, and Victor Tremblay-Desrosiers (also of The Hazey Tones) on the drums, this band is a musical force of sonic artistry, yet at a glance, it’s not shocking that The Mick Martel Trio caught the audience off guard.

Tattoos, bright pink hair, and worn down band t-shirts of doom metal’s, We Live By Night, don’t conjure up thoughts of Neil Young and Bad Company, but when you hear them play it’s clear they have reverence for the greats of old, and man, do they deliver a great show.

The night kicked off with an emotional rendition of Bob Dylan’s, Knocking on Heaven’s Door. In it, Mick’s soulful and dynamic vocals took center stage. Hauntingly beautiful, his voice traveled through the room only to be met by Gabriel’s lilting harmonies. It was a powerful opener and set the tone for the night.

From there the band rolled with ease through a myriad of 60s and 70s classics. A high point was their rendition of CCR’s, Susie Q which dare I say was better than the original. It had people dancing and singing along and brought the energy up to a level that didn’t go back down until the band walked off the stage.

Another high point came later in the night when the band showed off their jam skills in a rocking cover of The Beatles, Come Together. Which featured thunderous drum rolls from Vincent Tremblay, a melt your face off killer solo by Mick and high energy stage presence from Gabriel.

The Mick Martel Trio are a cover band with jam. They play the hits, but they play them with passion and soul.

Technical virtuosos with a knack for reinventing old standards in new and powerful ways, this band is an absolute joy to catch live and couldn’t be made up of a nicer bunch of guys.

For more information on when you can catch Mick, click here.