When her Majesty the Queen visited Cornwall 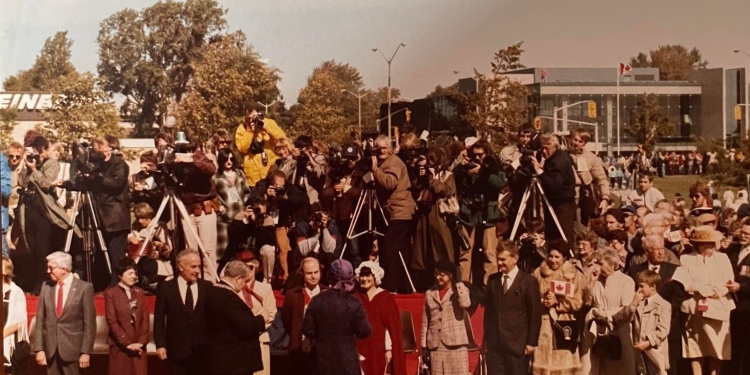 Cornwall Mayor Gerry Parisien introduces members of the Cornwall Bicentennial Committee to the Queen, front centre.  As you can see not all members of the Committee opted to be polyester clad Loyalists.  Committee Members from left to right:  Jim and Ms. Shea, Ron and Dorothy Sullivan, Ian Bowering and Lor Pelton, historian Elinor Kyte Senior and H. Senior.

THE 1984 ROYAL VISIT TO CORNWALL – a back story

To mark Cornwall’s Bicentennial and its loyalty to the British Crown under King George III, in 1784 , the  Bicentennial Committee was awarded with the promise of a short visit to Cornwall by the Queen and Prince Philip during their 1984 Royal Tour of Canada.

With this promise in hand, the Committee debated how they should dress for the occasion.  Some members wanted to wear “authentic” reproduction “Loyalist” garb made of very wrinkly wool, while others insisted that it would not be seemingly to be presented to the Royal Couple in crinkly clothing and pushed for iron free polyester.  They won.

Up to this point everything was going according to hopes, until the Royal Visit was cancelled due to the possibility of an upcoming Federal election.  The election was delayed and visit was rescheduled for September 27, 1984.

To prepare for the visit, the Committee were given a crash course on Royal etiquette that told us everything from how to address the Royal Couple, to the fact the Queen did not like the colour magenta.  Now armed with this knowledge, on the big day, the Bicentennial Committee and their partners trooped down to the Civic Complex, many in their polyester, to meet the Queen.

Surrounded by the media and security, which almost numbered as many as the crowd of 500 or so well wishers, we all waited for our Royal introduction.

Prince Philip preceded the Queen, making him the first Royal I was introduced to.  True to form, he immediately set about putting me in my place, first by asking what I did for a living. When I replied I assisted  in organizing the Royal Visit, he replied: “No, what do you do to earn a living?”  I answered that I was a museum curator, at which point he took my hand giving me an earnest look and said “No, no good man. What do you really do?” and then walked on.  Having been firmly put in my place, Cornwall Mayor Parisien now introduced me to the Queen, in an exchange that, mercifully, followed polite formal protocol.  The meet and greet over, the Royal Couple carried on towards  the Civic Complex to take a vehicle to their next stop, Trinity Church, while the rest of us stood around at a very laid back reception and had our photographs taken.

But wait!  All seemed fine until there was a sudden commotion.  They had forgotten Mayor Gerry Parisien and the Bicentennial Chairman, Bob Pearson and their partners.  The police were now pressed into service and the Cornwall duo made it in time to be part of the Royal Cavalcade to the train station.

Full disclosure:  the author of this piece was born a Brit now turned Canadian and served as Cornwall’s Bicentennial Coordinator.

Photo caption.  Cornwall Mayor Gerry Parisien introduces members of the Cornwall Bicentennial Committee to the Queen, front centre.  As you can see not all members of the Committee opted to be polyester clad Loyalists.  Committee Members from left to right:  Jim and Ms. Shea, Ron and Dorothy Sullivan, Ian Bowering and Lor Pelton, historian Elinor Kyte Senior and H. Senior.